While my favourite games are naturally openBVE and BVE Trainsim, another game which has also made a great impression on me is the first-person shooter Half-Life 2 and it’s follow-on episodes. I love this series of games because of the unfolding sci-fi story arc, mythology, characters, exotic technology, blend of elements of past, present and future, interactive environments and physics modelling; but they also feature some exceptionally high quality photo-realistic textures, lighting, atmospheric scenes, visual effects and a variety of nice touches which help to bring Half-Life 2’s dystopian world to life. Now that openBVE’s animation capabilities can be experimented with, I thought I’d bring a couple of the things I’ve noticed in Half-Life 2 to my own routes–no, not portal storms, teleportation devices or xenomorphic creatures wreaking havok in the streets of Birmingham, tempting though that is; rather animated birds and cables. Okay, maybe not quite as exciting, but anyway, Half-Life 2 features birds which fly past in places, and cables which sway in the wind:

Using openBVE’s animated object translation and rotation functions, similar effects can be created. I downloaded a Reverse Polish Notation calculator to assist me in understanding what some of the translation values being calculated actually are, and this helped me to create birds which move at the right speed at the right time, and have flapping wings to add a little life to them, although I haven’t figured out how to increase the speed of the flapping yet. The return conductor cables sway back and forth as though buffeted by strong gusts of wind, and I exchanged the sine and cosine functions in alternating objects so each cable length doesn’t sway at the same time as the next, making the overall movement look rather more natural. I’ve amended my previous video with some extra shots of these features: 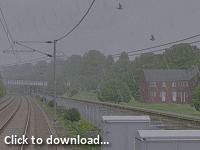 Note: Just to reiterate, openBVE will have built-in rainfall in future, so using animated objects to create this effect won’t be required eventually; but I was curious to see if such effects were possible with animated objects alone. The passing train is just a fun experiment, and animated objects aren’t really suited for this purpose as the animated object doesn’t follow any track, but rather a direction defined in the animated object file; I probably won’t include it in the final release route as there’s no sound accompanying the train.

This entry was posted by Anthony Bowden  on Monday, December 1st, 2008 at 10:00 pm and is filed under openBVE. You can follow any responses to this entry through the RSS 2.0 feed. You can leave a response, or trackback from your own site.


One Response to “More Animated Objects”