I’d like to apologise for the lack of updates recently, unfortunately I had to take a break from the world of openBVE during the past few weeks. This means that the Cross-City South v1.4 project has lain dormant for much of that time, however I’m pleased to say that a pre-release version of the new class 323’s 3D cab can now be downloaded as an update for the openBVE beta class 323 available from trainsimcentral.

This initial release of the 3D cab comes complete with working gauges, as well as an animated traction/brake controller, reverser, AWS reset button, and horn lever, along with working TPWS indicators, AWS sunflower, DRA, and other indicators as well. Cab lighting is also included, along with semi-functional headlights (but not in the daytime headlight configuration). With openBVE’s Interior (Look Ahead) camera view accessible by pressing F1 until the view mode is selected, the Mouse Grab option enabled by clicking the Right Mouse Button within openBVE’s 3D view, as well as the driver’s body/head motion simulation model, a more realistic experience of driving the class 323 should now be possible. 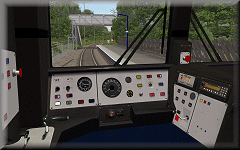 Please note that this 3D cab isn’t entirely finished yet, and some non-essential details are yet to be added; it’s been updated since the version shown in the recent » YouTube video « however, especially on the non-driver’s side of the cab (a big thanks to » Steve Green « for his help here).

This release works best with a route designed to accompany it, in this case, Cross-City South v1.4. Of course this isn’t available yet, so I’d recommend the following routes for testing. The Network West Midlands routes also include neutral sections, of course:

Any routes, including the experimental night route.

I would have liked to release the exterior views and/or Cross-City South v1.4 along with the 3D cab so that a greater experience could be had, however neither the route or external objects are in a state which I would consider fit for public release yet. In the case of the exterior car objects in particular, they’re much closer to being ready, but only for those of you with faster CPUs and graphics cards. I don’t wish to discriminate against those with slower hardware, so I’d prefer to only release the 323 exterior car objects after I’ve created optional lower detail 3D models as well. Hopefully the 3D cab will make the wait a little more bearable, though. 🙂