While creating the swinging cable objects demonstrated in the recent openBVE Object Animation/X-City South video (see the 1st December 2008 entry below), I opted to keep things simple and just rotate each 50m length of cable around it’s Z-axis to create the swinging effect I wanted; this was appropriate and sufficient for the types of cables in question. However, it’s also possible to split such an object up into segments, which can each be rotated and translated individually, to create more complex motion, bouncing, or to create the impression of elastic properties. When I was thinking about how best to animate the cables, it occurred to me that there was a rather nice application for the segmented object approach, in the form of people with animated limbs and simulated joints. I’ve been working on a slightly more ambitious animated object this time, namely a walking person which appears to have articulated limbs (please forgive the temporary placeholder objects comprising the figure, this is just an experiment and an early demonstration): 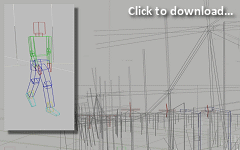 Each 50m long bouncing cable is comprised of 8 segment objects, each individually rotated and translated to create the overall movement shown. The animated person as a whole is comprised of 15 separate component parts, which means the upper and lower arms, upper and lower legs, upper and lower torso, feet, neck and head can be manipulated individually to create certain animated movements. It would be possible to have the figure waving, or moving one of his/her arms to check the time on a wrist watch, for example. The tricky part now, will be creating more detailed geometry and textures for the animated people which I hope to include in Cross-City South v1.4.

Finally, if you find the above interesting, then I recommend you visit the » openBVE homepage « and download the latest version 0.9.1.15 of the program, along with the updated DemoRoute1. In another stroke of genius, Michelle has added both a working signal with a flashing aspect, and a working lower quadrant semaphore signal to the route, complete with lamp and damped semaphore arm motion. Highly impressive! As she mentions in her » Developer Log «, the .AnimatedObj command can now reference sections in a similar way to the .SigF command, and an animated object can get the state of that section, therefore the flashing aspects found on the signals approaching the New Ledburn and Hanslope Junctions on my Watford to Rugby route can now be implemented realistically. I’ll be having a play with this new functionality during the next few days.

This entry was posted by Anthony Bowden  on Saturday, December 6th, 2008 at 10:00 pm and is filed under openBVE. You can follow any responses to this entry through the RSS 2.0 feed. You can leave a response, or trackback from your own site.