If you’ve visited the » openBVE Homepage « recently, you’ll know that Michelle has released openBVE v0.9.1.5 and DemoRoute1, and these introduce animated objects to the community for the first time. While the new animation capabilities are just a preview, aren’t supported yet and are subject to change, I’ve been playing with the new functionality to see what might be possible. As the animation capabilities may be altered in future versions of openBVE, none of these X-City demonstrations should be considered final.

In Michelle’s DemoRoute1 we can see an animated departure screen, clock, an A320 flying overhead, flashing level crossing light, moving cars and simulated interaction, and an escalator. These are the kinds of features I’d like to add to Cross-City South v1.4 as well, as they’re just brilliant–but rather than show you what Michelle has already demonstrated, I thought I’d start with something a little different. In the video below, I’ve used .PointOfInterest commands, and placed animated sheets of rain to create the effect of precipitation (achieved via texture shifting), moving clouds achieved via the same method, and animated water on the canal.

Note: openBVE will have built-in rainfall in future, so using animated objects to create this effect won’t be required eventually; but I was curious to see if such effects were possible with animated objects alone. 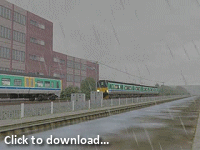 Note: This video is now included as part of a compliation on YouTube.

A note on the passing train–this is just a fun experiment, and animated objects aren’t really suited for this purpose as the animated object doesn’t follow any track, but rather a direction defined in the animated object file; I probably won’t include it in the final release route as there’s no sound accompanying the train. However, the technique is suitable for trains passing over or under bridges for example, like in the » IIYAMA Line 2060 « route, where the train is some distance from the player, moving across the screen (Lichfield Trent Valley on the Cross-City North route could also be a suitable location for such an effect):

The moving water in the above X-City South v1.4 video also needs some work, but involves a static canal object with ordinary texture, and then two animated, texture shifted alpha-enabled surfaces overlaid; one moving left to right (to match the cloud’s direction of movement), and the other moving along the Z-axis. When combined, they make the water appear to ripple slightly if you look closely for a few seconds, particularly where the tree reflections are visible on the right.

The Cross-City South v1.4 update has been in progress for the past few days. To start with, I’ve rearranged all the files into a less complicated directory structure, and removed the seasonal variations for the time being, with just Summer remaining for now. I’ve also removed all but two route files from the package, which I’ll work on to create a new foundation on which other route files can be created in future; this makes maintenance much easier and the updated route quicker to check for problems. I’ve also been removing all .X format objects, which I’ll replace with .CSV versions, with surface illumination achieved via openBVE’s new extended commands instead, along with day/night texture transitions achieved using single objects rather than seperate day and night objects, as was the case in Cross-City South v1.3 for BVE4. This helps to save some disk space, along with making the route much easier to maintain.

Along with openBVE’s error reports, I’ve also been using Oskari’s » BRR.NET « utility to check for other issues, to ensure that the new “template” route files are as trouble free as possible. I’ve also been updating the route with new vegetation textures and track objects, taken from the Watford Junction to Rugby route; here’s how it’s looking so far in the openBVE Route Viewer tool (the reported errors are temporary, due to missing textures which I haven’t relocated yet!):

The shadow effect used for the bullhead rails is based on an idea which Simon Gathercole came up with a while ago. The next time consuming task will be updating all the pointwork, which I’ll start work on soon. I’ll also be exchanging the terrain and grass textures for new versions, making the scenery look better when using the external views, adding backfaces to various objects so the route can be viewed in the opposite direction without needing to hit F11 in openBVE, and adding soft shadows to various objects, which together with the new textures shown above, should improve the appearance of the route considerably. Due to popular demand I’ll be creating a new diagram which starts from the Longbridge reversal siding rather than Redditch, and I’ll also be looking into more animated object possibilities; I have a few ideas already.

I thought I’d show the current state of Rugby station, as I haven’t posted any screenshots of this location yet (due to it being unfinished). I’ve only laid the track and electrified the area so far, but as you can see from the images below, this is a very complex location to model, with numerous tracks, diverging lines, two flyovers, pointwork, curves and so-on. There’s no finished scenery yet, and the supports are missing from beneath the flyover, but once these, and the station buildings and lineside buildings are added, it should look rather good.

Please note that in the overhead shots, a 2400m drawing distance is set with a high level of zoom used, hence the station looks somewhat shorter than it actually is, and the curves sharper than they actually are. The released route will be based on the track layout prior to the recent remodelling work at the real station (I have to draw the line somewhere with a route that’s being constantly upgraded in reality; this way I might actually be able to finish the project!!). The track layout depicted here is a mixture of the layout as it was in the 80s and late 90s, and I’ll remove the relevant tracks in the final route files, depending on the era being depicted in each one:

In this first entry, I’m going to talk about shadows, contrast and realism. Recently, I’ve been playing around with improved shadows and lighting effects, which are now possible thanks to » openBVE’s « support for daytime/nightime texture transitions, as well as support for alpha-enabled PNG images which can be used as textures. Michelle and I briefly discussed time-of-day texture transitions and headlight glow effects recently, and it occured to me that not only could a glow effect be achieved with openBVE’s extended commands, but soft shadows could also be created. In these two screenshots of the Class 323 EMU on Cross-City South, you can see how these openBVE capabilities facilitate a rather nice effect in-game, which I feel adds to the visual quality and immersiveness considerably:

A while ago, » Daniel Beardsmore « and I were discussing my Watford Junction to Rugby screenshots, and that while they looked good, there was just something… not quite right about them. He hit the nail on the head when he mentioned contrast–which is simply too low in my textures–resulting in a somewhat washed out appearance to many of the scenes:

While helping with some of the » now resolved « openBVE plugin compatibility issues recently, I spent some time enjoying… sorry, testing… the rather stunning Japanese » ATS-Sn/P Test Route «, and afterwards, the deficiency in my own textures became even more obvious, as the ATS-Sn/P Test route’s textures have greater contrast and more shading, creating a much richer and more realistic and compelling visual experience, despite both routes using photo-realistic textures:

The effect of shadows and contrast is also shown to good effect in the Joetsu Border and South routes (available here: » http://gri.s60.xrea.com «):

Adding better shadows to Watford Junction to Rugby helps considerably, although I need to up the contrast further still, particularly in the vegetation textures, and add more shading to the track textures: