I’ve been continuing with some more cosmetic updates for Cross-City South v1.4, and I’m in the process of adding superelevated track, transition curves and lead-in/lead-out track objects to enable smooth changes from level to canted track. With » Watford Junction to Rugby «, which already includes superelevated track objects and lead in/out objects, I’d adopted a system where curved track objects with 35mm, 70mm and 125mm cants were modelled, with a set of lead-in/out transition objects going from 0-35mm, 35-70mm and 70-125mm at varying curve radii, which enabled a nice, gradual increase or decrease in cant within a curve. These lead in/out objects are placed not as .Rail objects, but as .FreeObjects, and are used in conjunction with one of several invisible null rails which each have a different run sound, such that I don’t need to add too many new railtypes to cover all the possible combinations of run sound and required canted transition curve objects. This technique still results in quite a number of FreeObjects however.

While looking at the » ATS-Sn/P Test Route «, I was impressed by the appearance of the superelevated track and transition curves, which I felt were better than my attempts, and while looking at how the author achieved such a good result, I was pleasantly surprised to find that the technique used is actually more straightforward and efficient than that which I’d adopted, with just a simple pair of straight, left/right lead-in and lead-out objects used. I’ve trialled this on the Cross-City South, and I’m pleased with the results on the sharper curves, although for larger radius, higher speed curves, I’ll retain graduated 0-70mm and 70-125mm canted transition curve objects:

– Please note that the grass and terrain textures are only temporary

I’ve also been experimenting with the signalling functionality recently introduced into openBVE’s » animated object format «. I’ve now implemented flashing aspects which are used on the approaches to the 60 mph and 70 mph crossovers between the fast and slow lines on the WCML’s New Ledburn and Hanslope Junctions, respectively. I’ve also incorporated lens hoods which become illuminated according to the aspect displayed by these new signal objects, and these look better than the standard flat bitmaps usually used to represent signal aspects in BVE.

Jason Morgan, one of the people we can thank for introducing BVE to Western railsim users several years ago, asked me whether or not it would be possible to have animated points linked to a signal, such that the blades moved to the correct position prior to the signal clearing, for example, while the player’s train is waiting in a passing loop before being cleared to rejoin the main line. Indeed this is possible, either by making the point blade position depend upon the state of a section, or by making the animation functions conditional, for example, by basing them upon the distance from the set of points to the player’s train. When basing the point blade position upon a section state, this can be done simply with the aid of a .Pretrain command, such that the point blades move as the signal changes from red. However, by using a .Section 0;2;3;4;5 command (UK routes with 4 aspect signals usually use .Section 0;2;3;4), and a specially modified animated signal object which displays an aspect sequence of Red > Red > Yellow > Double Yellow > Green, the point blades can move prior to the signal aspect appearing to change from red, which looks more prototypical. This is only suitable when the player arrives at the signal while it’s associated section state is still 0 (red), however.

As part of the experiment, I created some fully animated point objects, which include moving point blades, stretcher bars, backdrive assemblies, linkages and levers. » openBVE’s « rotation damping functions also enable a rather nice motion of the point blades, which looks quite realistic. Both conventional and High Performance Switch System (HPSS) points are modelled.

Important note: Currently, trains in openBVE follow a single path throughout a route as with BVE Trainsim (based on Rail 0), with this one path coded in the route file which cannot be changed en-route. Therefore, these points are cosmetic only! 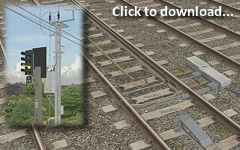 Note: this video is now included as part of a compilation on YouTube.

Stephen Cross has also kindly created a set of station sign textures for use in Cross-City South v1.4, so I’ll be creating a new set of objects allowing the actual station names to be displayed on signs at each station on the route:

I’ll also create some new lampost objects for the stations, as the existing ones look, well lets be honest, terrible.

If I have time, I’ll update the route to include London Midland textures as well, although this isn’t a priority for me at the moment.

This entry was posted by Anthony Bowden  on Tuesday, December 23rd, 2008 at 10:00 pm and is filed under openBVE. You can follow any responses to this entry through the RSS 2.0 feed. You can leave a response, or trackback from your own site.