One new variable is accelerationMotor. As mentioned on the openBVE forum, this can be used for creating working ammeters. The class 323’s cab doesn’t feature an ammeter, however, anyone wanting to experiment with this might like to consider the following panel.animated code as a *starting point*. You can copy and paste the code below into the 323’s panel.animated file to add a new ammeter needle to the cab and see it in action. Please bear in mind that I’ve not had time to test this in a variety of scenarios though:

Notes: in the rotatexfunction line, -2.4 determines the needle rotation with no motor acceleration, and 1.5 determines the needle rotation with maximum motor acceleration. You can adjust these two values according to your ammeter gauge design. If you add an ammeter to your own 3D cab, remember that the statefunction line and multiple states (*.csv files in this case) may not be necessary depending on what plugin DLL, if any, you wish to use. When it comes to designing full 3D cabs for the class 86 and 87 electric locomotives for use with Watford Junction to Rugby, I’ll revisit ammeter design in more detail.

I’ve also fixed a few bugs in the Cross-City South route. There were a few objects (houses, warehouses etc.) which included some surface lighting issues, which have now been fixed. Some class 170 3D objects also contained incorrect ‘Color’ commands resulting in errors being reported when the routes were loaded; these have now been changed to ‘SetColor’, which is correct for CSV format objects. As some of you will know, the Cross-City South also uses some .Sta commands only for signalling approach control purposes, which aren’t meant to be stopped at. However, you would still be penalised if you passed such a station without stopping. Thanks to Paul Sladen, I’ve now corrected these .Sta commands so that you can pass them without being penalised, while preserving the approach controlled signalling functionality.

There aren’t any new features included, as all of those improvements are going into the Cross-City South v1.4 project instead, and I’d prefer to hold those improvements back until the v1.4 is ready for release, as the end result will be more enjoyable that way.

Incidentally, the changes to the .Sta commands are as follows (the ArrivalTime and PassAlarm arguments, which are underlined): 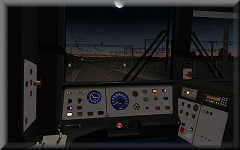 I’ve also updated the 323’s 3D cab so that it makes use of the new hasPlugin variable. If you’re using openBVE v1.2.2 with a non-Windows operating system, then this will allow the cab illumination to work in the absence of the Windows only plugin DLL, which wasn’t the case previously.

I’ve also made some adjustments to the placement of the brake gauge, as it wasn’t quite right before, and now when you pass through a neutral section, the cab lighting should remain unaffected as the UKMUt.dll’s ats30 (pantograph up) is used as well as ats31 (Line Volts) now. The carriage light dimming effect will be retained in the passenger area once the new 323 external objects are released however. I’ve also remembered to remove several superfluous GenerateNormals statements from some objects this time, as they serve no purpose in an openBVE add-on.

Someone also kindly informed me that there may be some further innaccuracies with the cab’s indicators; once I’ve investigated further I’ll address these issues at some point in future. It’s also nice to note that the 3D cab may have been downloaded perhaps as many as 1500 times since it’s release.

I’m not making much progress with my projects at the moment, and I know that some of you may be disappointed that I’ve not yet finished Cross-City South v1.4 despite me saying that it’d be done before now (this is also why I’m usually reluctant to give release dates, and I shouldn’t have done so where this project is concerned). Rest assured, barring any disasters, it will be finished eventually and I’m still in the game, however, sometimes circumstances in the real world prove to be too much of a distraction, and it means that what one wishes to accomplish in the simulated world has to wait for a little while. This won’t last long however, and patience will be rewarded.

The Saijou Line for openBVE was released a few days ago (the author’s » blog « is linked to via my blogroll), and this is an openBVE exclusive route featuring some very nice atmosphere and night lighting. There are a few errors, however the route is well worth giving a try, as it’s a good example of how animated objects and lighting can be used to bring much more life to a route and make it that much more enjoyable. You’ll find a variety of blinking lights, such as car indicator lamps, and the aviation obstruction lights fitted to tall structures (I’ll be modelling the same feature on the cluster of 250m tall VLF radio towers at the Rugby Radio Station on the Watford Junction to Rugby route). Moving cars and buses can also be found on roads, as well as flashing level crossing lights, road based traffic lights which change when the train is approaching, animated water, and moving elevators. You can download the route here: » http://tozai.s77.xrea.com/BVE/Sjyou.html « (the author’s homepage is here: » http://tozai.s77.xrea.com «)

Edit: Another openBVE route recently updated, was the Chashinai Railways network, along with the 9000 Series train; when this train is used with the Misaki Line in particular, in addition to ATC, you can now enjoy simulated TASC (Train Automatic Stopping Controller) and ATO (Atomatic Train Operation) systems which enable fully automated driving, thanks to a new plugin which enables sophisticated safety system simulation. The 9000 series’ panel also includes photorealistic dirt on the windscreen, increasing realism. Visit odakyufan’s website for the updates, and don’t forget to read the Train Operation Manuals before you start: » http://odakyufan.uuuq.com «

This entry was posted by Anthony Bowden  on Monday, September 28th, 2009 at 6:34 pm and is filed under openBVE, Site News. You can follow any responses to this entry through the RSS 2.0 feed. You can leave a response, or trackback from your own site.