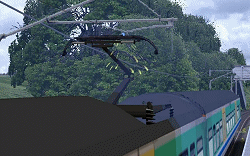 The latest additions to Cross-City South v1.4’s collection of animated objects include sparking effects between the pantograph head and the contact wire. These spark objects aren’t just small points of blue with emissive properties, but they flicker and flash, and through the use of a large surface with a mainly translucent blue sunburst gradient texture with emissive properties applied to it’s mesh, appear to illuminate anything behind the surface, creating quite a nice effect, especially in low light or at night. Through the use of texture shifting, yellow sparks also appear to fly off the pantograph head.

I originally wondered if this effect should be included in an animated car object along with the animated doors, wheels and so-on which are already planned, where the meshes with spark textures are positioned at the centre of the pantograph head, and perhaps flash depending on the speed of the train. However, my routes feature overhead lines which are registered and staggered (i.e. they zig-zag from left to right where appropriate), which could render the sparking effect less effective if the spark itself doesn’t appear near enough to where the contact wire is touching the pantograph head at a particular location in the route. Including the spark objects in the route itself rather than the car object allows me to overcome this little problem and align the spark with the contact wire, even if it takes longer to add the objects to the route. The animations are controlled using the Distance[i] variable, but with a very low distance specified, so the sparking is only visible for a short time as the centre of the referenced car is within around a metre of the animated object’s insertion point. The spark csv objects themselves are offset along the z-axis, so as the referenced car’s centre passes the animated object’s insertion location, the spark is displayed where the pantograph is located instead. As with the animated vegetation, I’ll include this effect at station areas, and points of interest.

A new video is available below to demonstrate the effect; I’ve included it as part of a compilation of my previous videos and uploaded the full video to YouTube this time. It’s available in YouTube’s High Definition format (embedded below), and a link to the high quality version on YouTube can also be found below, if you don’t have the downstream bandwidth or a fast enough CPU/graphics card to watch the higher resolution content smoothly.

This entry was posted by Anthony Bowden  on Sunday, January 25th, 2009 at 10:00 pm and is filed under openBVE. You can follow any responses to this entry through the RSS 2.0 feed. You can leave a response, or trackback from your own site.